Today I was dealing with one of the questions related to local language support for SQL Server sys messages and suddenly this idea came to my mind to check whats the improvement for SQL Server 2012.

I was surprised to see that SQL Server 2012 now supports more languages for sys messages than what it was supporting earlier(2008 R2).

sys.messages catalog view will confirm the languages supported by SQL Server if you are having a localized version of SQL installed. 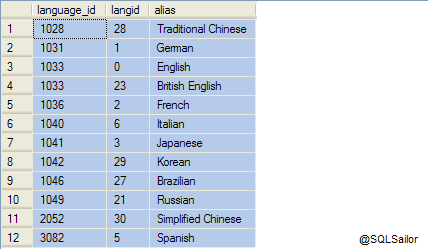 The only important thing to notice that these localized error messages will appear only if you have installed a localized version of SQL Server(Say for an example French,Spanish or Russian)

I love to see improvements in SQL Server 2012,and these days when ever I work on something or check something new I make sure whats the behavior happening with SQL Server 2012. Apparently we all love 2012 deeply,aint we?