I started using a MacBook Pro at work, and the very first thing I did was configure SQL Server 2017 running on a docker container, and run it locally within the Mac. In this post I will discuss some tips and tricks which will come handy if you are interested to pursue this route.

You can follow the below steps to get started.

Tip 2 : How to connect to the SQL instance running on a container via SQL Operations Studio?

Tip 3 : How to view the running containers?

Tip 4 : How to stop the running container?

Tip 5 : How to view the details of containers which are in stopped state?

Tip 6 : How to connect to the SQL instance running on a container via command line?

Run the below sqlcmd command –

You can issue regular T-SQL commands after you establish the connection.

If you remove the container, the entire database which you might have configured is lost. To avoid this, you can create a data volume container. Below is the command to create container with a data volume with name sqlvolume –

The databases which you create will now be persisted until you delete the volume.

Tip 8 : How to share the data volume container with multiple containers ?

The ability to spin up and spin down containers and multiple containers is changing the way I test various versions of SQL Server/Databases and its super flexible when it comes to a CI/CD pipeline.

Thanks for reading, and keep watching this space for more.

One of the questions which I normally get all the time whenever I talk about SQL Server and Docker is – Why you want to run SQL Server on containers?

Here is what Microsoft has to say:

“Windows Containers are an isolated, resource controlled, and portable operating environment. An application inside a container can run without affecting the rest of the system and vice versa. This isolation makes SQL Server in a Windows Container ideal for Rapid Test Deployment scenarios as well as Continuous Integration Processes.”

Recently I had a chance to invest sometime configuring SQL Server 2017(CTP 2) on Windows Containers, and this post will give you the step by step instructions on how to configure this.

All my testing was done in AWS, and I picked the below AMI- Microsoft Windows Server 2016 Base with Containers

Do docker pull to get the Official images for Microsoft SQL Server for Windows Containers.

Run docker ps and note down the container_ID.

Run docker inspect and note down the IP of the container.

Connect to the SQL Server(Instance) outside the container via SQL Server Management Studio. Use the IP to connect. 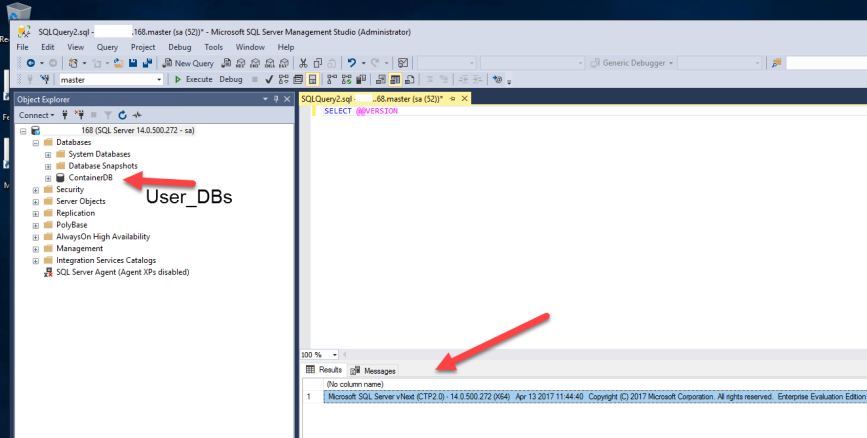 That’s pretty much it. Within 7 steps you are running SQL Server 2017 on Windows Containers. Its super lightweight and easy to spin up. Perfect fit for a CI pipeline.

Thanks for reading, and keep watching this space for more(container goodness!).