Native backup encryption is one of the key features which was announced with this release, and I’m sure this feature will be widely used.

Native backup encryption will encrypt the data while creating the backup, and eventually you will end up creating an encrypted backup file. This is one of those features which was only provided by 3rd party tools [Similar to backup encryption].

Now backup encryption is out of the box for SQLServer 2014 !

So,what all are the pre-requisites to get started with this feature –

1.  You will need either Standard,Enterprise or BI edition of SQLServer 2014.

2. You will need to have a Certificate or a Asymmetric key.

3. You will need to choose the required encryption algorithm.

As we now know the pre-requisites ,lets try to create an encrypted backup and follow the process one by one.

First we will create a master key –

Followed by creating a Certificate

Once all the keys/certificate requirements are taken care, we will proceed to create an encrypted backup file by specifying the certificate and a backup algorithm. The syntax is pretty simple –

That’s it ! Now we have an encrypted backup file and the result after running the above statement is   –

You might have noticed the warning, it tells you that the certificate is not backed up. Its always recommend to backup the certificate as soon as you create it. [Be safe always !]

Also the algorithm which I mentioned in the above query, ie AES_256 is one among the 4 options available. The rest 3 are  –

GUI also offers this ability and the encryption options are available in the backup options. 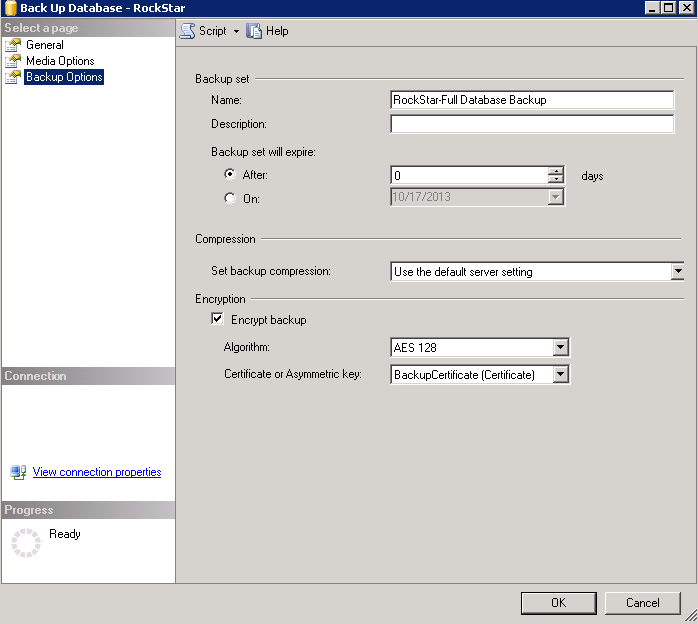 Native backup encryption is certainly a good to have feature and I’m looking forward to test this really well during the next few days.

Thanks for reading and keep watching this space for more.