Straight away I was struck with this error. 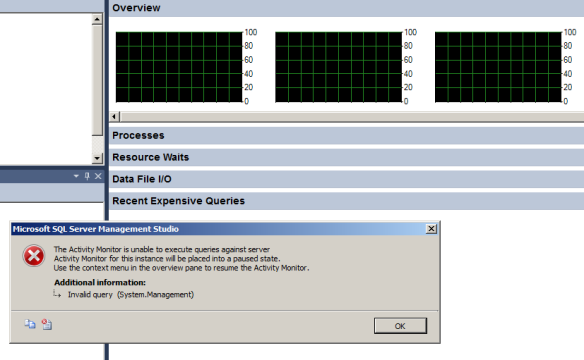 By using the ‘Show Technical Details’ button I tried to see if there is something which I can fix by myself,however there were no much details other than the program details for which I don’t have any visibility.

I was connected to a SQL2005 (9.0.5000) Instance using SSMS 2012 (11.0.3339.0) and was trying to launch Activity Monitor. Ideally this should have worked well without issues as higher version of SSMS should not have any issues connecting working with lower versions of Database Engine.

The error message also says that Activity Monitor is in paused state and use the context menu in the overview pane to resume it.

This resume did not worked and apparently I received the same error message which I received in the beginning.

I tried multiple options, however there is nothing which I could find to get this fixed and start Activity Monitor properly.

Viola, that worked ! Activity Monitor was just fine this time.

This clearly means that the inability of SSMS 2012 to pull Activity Monitor for a SQL2005 Instance is because of a BUG.

A quick search on connect revealed some items related to this issue. Even though this connect item is dealing with a different version of SSMS and a SQL Engine, the issue seems to be the same.

I also tried connecting SQL2012 SSMS with SQL2012 and SQL2008 R2 instances and launched Activity Monitor successfully. Apparently the issue seems to be floating around with higher version of SSMS connecting to SQL2005 and trying to launch Activity Monitor.

Workaround –  I generally maintain major versions of SSMS on my work machine and this  comes handy during some instances.

Again this is not a mission critical bug which will cause work stoppage, however this should be fixed eventually and I hope SQLServer Product Team will fix this during upcoming SPs.

Thanks for reading and keep watching this space for more.

3 thoughts on “The Activity Monitor is unable to execute queries against the server !”